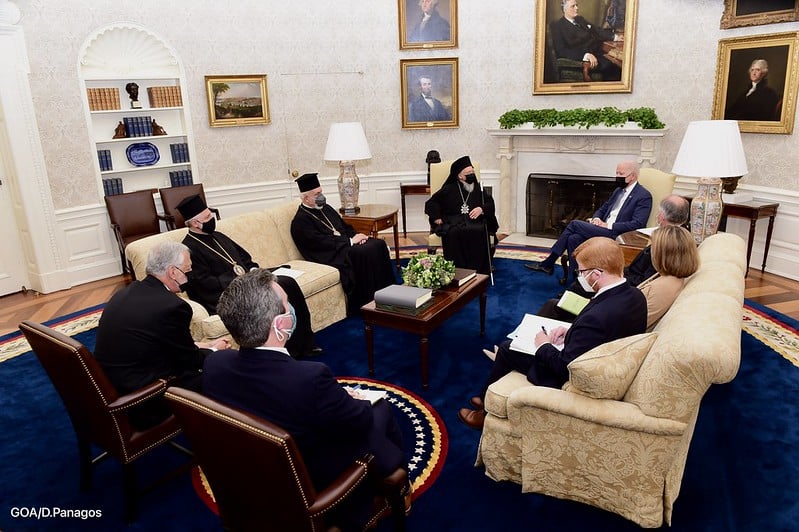 U.S. President Joe Biden on October 25 met in Washington with His All-Holiness Ecumenical Patriarch Bartholomew, according to the White House press service.

Biden congratulated His All-Holiness on thirty years of “moral and spiritual leadership” as Ecumenical Patriarch.

“The President expressed relief at the Ecumenical Patriarch’s speedy recovery,” the readout stresses, adding that the two discussed efforts to confront climate change, steps to end the global COVID-19 pandemic, and the importance of religious freedom as a fundamental human right.

The meeting underscored the “critical role that faith communities play in confronting the range of global challenges.”

It also underlined the decades-long friendship and partnership between President Biden and His All-Holiness the Ecumenical Patriarch, the report concludes.

Bartholomew said he was extremely pleased with the meeting with the American leader.

“The president is a man of faith and a man of foresight,” Bartholomew said, adding he believes Biden will offer the country and the world the “best leadership” within his considerable authority.

Raising the topic of the COVID-19 pandemic, the Ecumenical Patriarch expressed his position on vaccination.

“I would like to inform you that together with His All-Holiness the Pope and the Archbishop of Canterbury, the head of the Anglican community, and the religious leaders of Muslims and Jews, we will appeal to the whole world to help vaccinate everyone, especially the poor, so that everyone is safe.”

The president of the United States has praised the initiative.

His All-Holiness Ecumenical Patriarch Bartholomew also met with U.S. Secretary of State Anthony Blinken, sharing his concerns about the treatment of Christians in the Middle East and drawing attention to the need for political action in response to climate change.

The Ecumenical Patriarch arrived in the United States on October 23. On Sunday, he felt unwell following the long flight and busy schedule. The patriarch was admitted to a hospital at George Washington University. On Monday, the press service of the American Archdiocese announced that the Ecumenical Patriarch had been discharged from hospital. Bartholomew’s visit is expected to last until November 3.