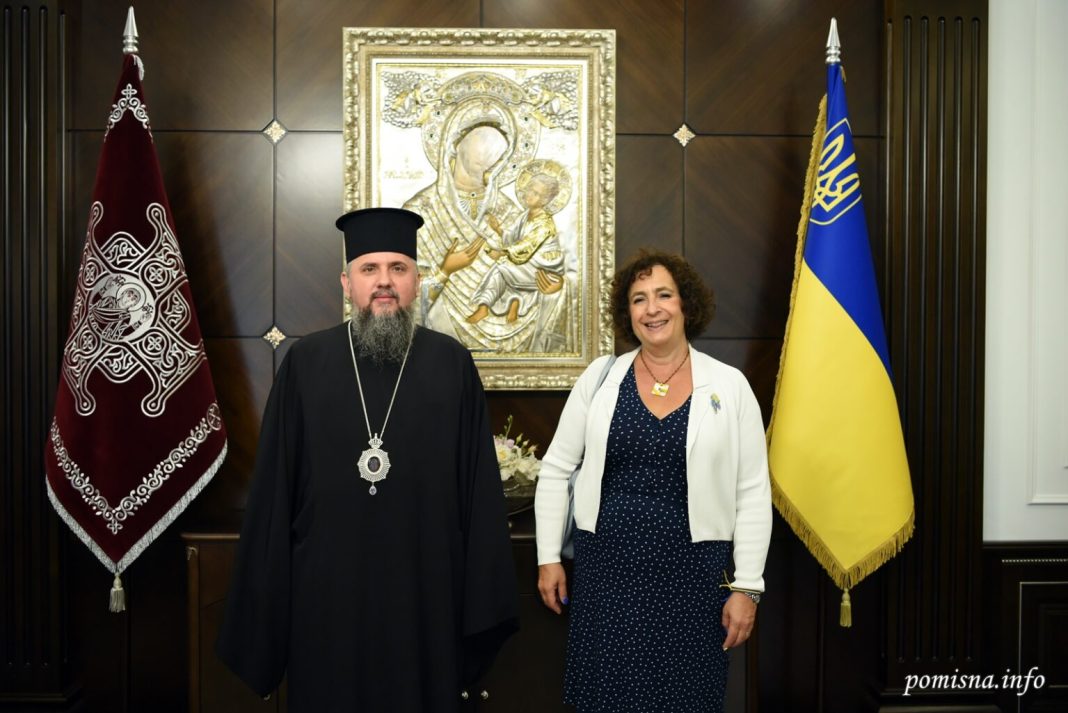 On August 5, 2022, His Beatitude Metropolitan Epifaniy of Kyiv and All Ukraine received at his residence the Ambassador Extraordinary and Plenipotentiary of Great Britain to Ukraine, Melinda Simmons, accompanied by other diplomats.

This was reported by the OCU press service.

The deputy head of the OCU External Church Relations Department, Archbishop Yevstratiy of Chernihiv and Nizhyn also took part in the meeting.

The Primate told the Ambassador of his recent fruitful visit to London and a warm meeting with Archbishop Justin Welby of Canterbury.

The parties also discussed the ongoing full-scale Russian invasion of Ukraine, flagrant violations of the rights of believers of all denominations, except for the Moscow Patriarchate, in the territories temporarily occupied by Russian invaders, which is manifested in abductions, torture, intimidation, and coercion into the Russian administrative subordination.

In addition, during the one-hour meeting, the parties discussed the provision of large-scale aid to Ukraine by the United Kingdom and the inter-confessional situation and state-church relations in Ukraine.

“We feel sincere help from Great Britain, we thank you for the powerful and very important support at this time, and we also ask you to continue and strengthen your assistance to Ukraine,” His Eminence said.

Touching upon the issue of parishes’ transition to the Orthodox Church of Ukraine, the Primate emphasized that the key position is that such shifts must be voluntary and peaceful.

“Understanding the role of the Church, we categorically oppose any incitement of religious enmity. At the same time, the fact that communities have a full and legal right to self-determination and change of jurisdiction is undeniable. It has long been obvious that this process can’t be stopped, no matter how many manipulative reports and false interpretations some might try to spread,” Metropolitan Epifaniy concluded.