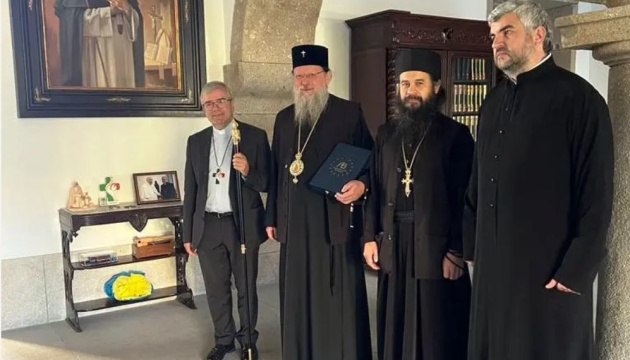 The Association of Ukrainians in Portugal addressed an open letter to the Conference of Bishops of Portugal in connection with the visit to the country of the bishops of the Ukrainian Orthodox Church (in unity with the Moscow Patriarchate).

President of the Association, Pavlo Sadoha, announced this on Facebook, according to Ukrinform.

“Taking advantage of the low awareness of Western societies about hybrid Russian religious schemes in Ukraine, the pro-Russian bishops received material aid from the Catholic Church of Portugal, as if for the needs of Ukrainians,” he wrote.

Sadoha emphasized that the bishops of the UOC (MP) who visited Portugal were accompanied by the priest of the Russian Orthodox Church in Portugal – Alexander Piskunov, who, in turn, is a member of the Coordination Council of Russian Compatriots and the Russian World Foundation.

“We have information that the mission of the UOC MP bishops who visited the countries of the European Union (EU), including Metropolitan Meletius (Yehorenko), is to spread “hybrid” propaganda among Ukrainian refugees, to collect information about NATO countries, and on other issues that are of interest to the Russian Federation. This was confirmed by the fact that the bishops of the UOC-MP, who were in Portugal, were accompanied by the priest of the Russian Orthodox Church – Oleksandr Piskunov, known in Portugal as a member of the Coordination Council of Russian compatriots at the Russian Embassy,” the letter says.

The Association of Ukrainians in Portugal expressed its understanding that the reception of the bishops of the UOC (MP) by the Catholic Church of Portugal was an act of “welcoming with open arms”, the purpose of which is to help and minimize the suffering of the Ukrainian people, but at the same time informed that, unfortunately, the name “Ukrainian” does not automatically mean pro-Ukrainian content and that it is often used in special programs run the Russian government to mask the goals of their invasion of Ukraine.